ABOUT THE AWARD WINNING PROJECTS: Following a sanitary evaluation in 2017, Springs School District sought to go above and beyond with the replacement of Springs School’s existing on-site wastewater treatment system in East Hampton, NY. With an antiquated system and a proposed building expansion in its location, H2M was retained to design a 5,000 GPD system implementing five Suffolk County innovative and alternative onsite wastewater treatment system units (I/A OWTS). Priorities in the design process included maximum nitrogen-removing capabilities and ability to handle seasonal flow fluctuations. 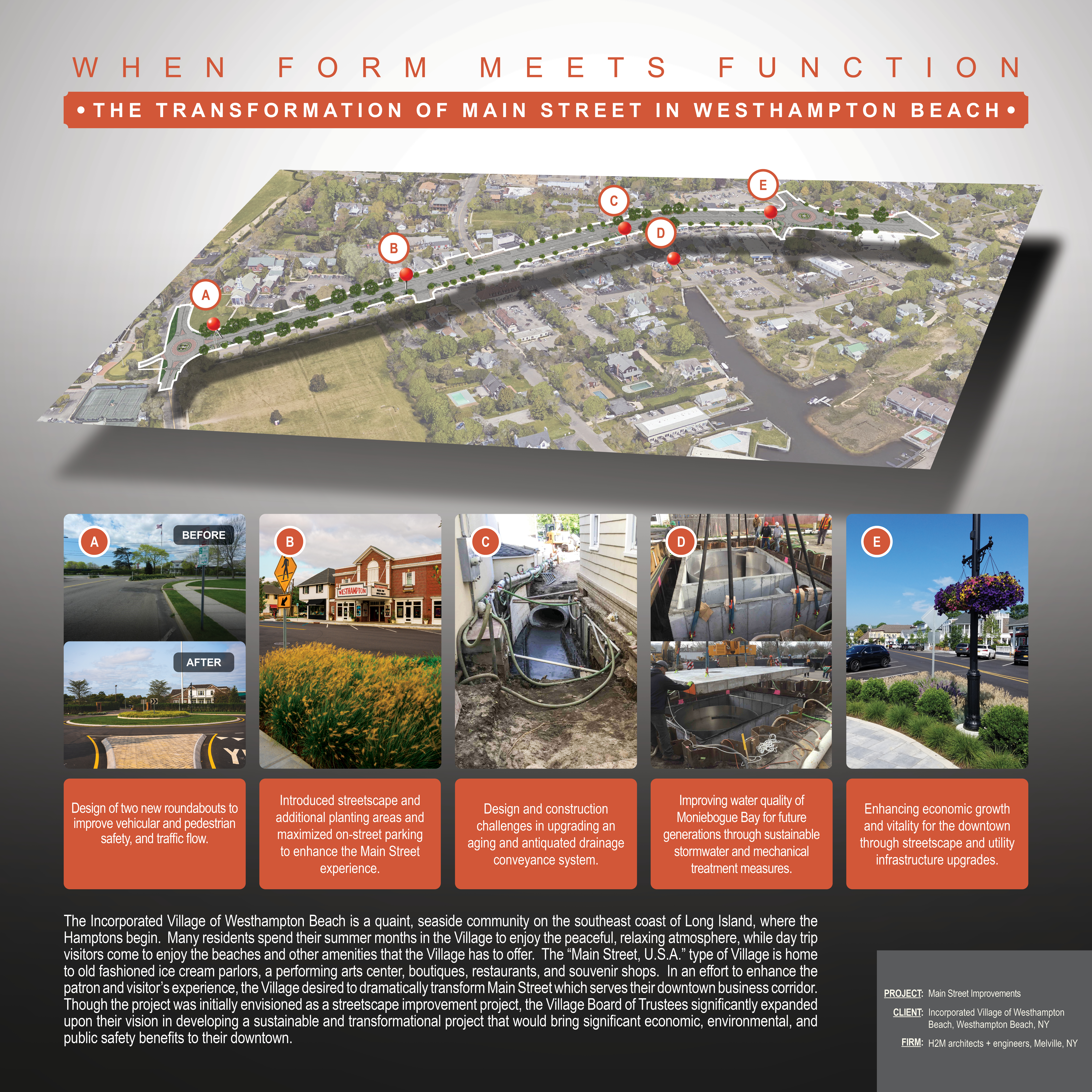 In an effort to enhance patrons and visitor’s experience, the Incorporated Village of Westhampton Beach wanted to repave the 2,100 foot long portion of Main Street and widen adjacent sidewalks to provide outdoor café spaces for businesses, while simultaneously improving pedestrian access. H2M suggested the Village evaluate the condition of the sub-surface elements of their infrastructure to avoid having to construct sidewalk and pavement improvements twice.  The Village took this into consideration and decided it was time to completely enhance all elements of Main Street – from new drainage pipes and sidewalks to stormwater management and landscaping.  The project was completed on time and within budget. When the EPA released UCMR3 engineers and water suppliers quickly realized that levels of 1,4-dioxane were pervasive and detections were highly concentrated throughout Long Island water districts.  Since 1,4-dioxane cannot be treated through conventional water treatments, H2M completed multiple pilot studies on a tight schedule to find the best solution.  The project was completed on schedule and within the proposed budgets. With no EPA Maximum Contaminant Level (MCL) for 1,4-dioxane, New York State announced in 2017,  it would establish contaminant specific MCLs in the State for 1,4-dioxane (and other perfluorinated compounds). The Governor’s office created a Drinking Water Quality Council (DWQC) comprised of experts and stakeholders from across the State, to evaluate issues and offer recommendations to the NYSDOH.  In December 2018, the DWQC recommended an MCL of 1.0 micrograms per liter (Mg/L) for 1,4-dioxane and 10.0 nanograms per liter (ng/L) each for PFOA and PFOS. With no clear timeline provided for implementation of the new MCL, water purveyors were faced with making critical timing decisions in the context of operational impacts to their specific systems.  While the industry closely monitored the issue, suppliers took proactive steps to advance testing, design, and construction of treatment systems in advance of the anticipated summer 2020 deadline. A decade ago, Town of Galway Supervisor Paul E. Lent proposed a facility for Saratoga County that would house emergency service and community safety related departments together for efficiencies of communication, mutual support during crises while solving the need for modernized, expanded space.  H2M was charged with designing how all the departments’ physical footprints would work efficiently under one roof.

H2M Volunteers Featured in The Saratogian